The founder was Fr Daniel Haigh, a convert Anglican clergyman who paid for its construction from his personal fortune. He hoped that monks would be able to serve his church and included a spacious sanctuary to allow for choir stalls. His hopes were fulfilled in 1876 when Benedictine monks from Beuron in Prussia, expelled in the kultur-kampf, offered their services. He was able to make them Trustees of the church and property before his death in 1879. By the following year a monastery was built with a community of eleven monks.

A little bit about our church and parish.

Our Church of Ss Thomas and Edmund of Canterbury, popularly known as Erdington Abbey, has been serving the Catholic population of Erdington, Birmingham, England since 1850.

Designed in the Gothic style by Charles Hansom (brother of Joseph Hansom of the Hansom Cab fame,) it strongly resembles the work of Augustus Pugin, who is said to have made the first drawing.

After World War I, during which the community suffered aggravation, it was possible for the community to return to their homeland, and in 1922 the Redemptorists (Congregation of the Most Holy Redeemer) took over the Trust. In the years that followed the monastery was home to the priests and brothers of the mission and parish staff, a junior seminary, and distribution centre for Redemptorist Publications. In the 1980s it was no longer fit for purpose due to new fire regulations and was taken over by a private school in the 1990s which could make the necessary and substantial alterations.

The Redemptorists continue to serve the church and parishioners. 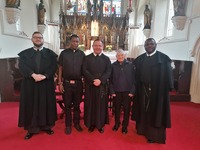 More about the Redemptorists

In the eighteenth century a promising young lawyer called Alphonsus de Liguori felt he was being called to make a difference for the poor and abandoned of his day. He too asked the question:

"What must I do to inherit eternal life?"

"In what way am I being called to be fulfilled,

to have a life worth living?"

He found his answer in forming a small band of missionaries in Italy. He did this with the help of a visionary sister and co-founder of the Redemptorists, her name was Maria Celeste Crostarosa. They decided that the missionaries would be called 'The Congregation of the Most Holy Redeemer'.

That initial step was truly blessed by God and his congregation exists and thrives today all around the world. To find out more about the work that we do please click here.

For more than sixty years Redemptorist Publications has been providing high quality practical resources to support Christians both in the Catholic and the Anglican traditions. It's really important to us that everything we produce is genuinely supportive and understanding of people, whatever their level of faith. Everything we write is inclusive, everyday language and we use the best of contemporary design to keep our material looking modern and appealing. Please click on the link below to find out more...